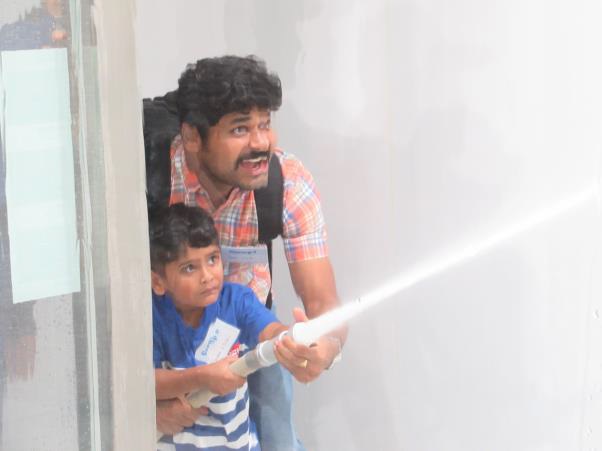 Many disasters have occurred in Japan in the last few years. There are quite a few of us Japanese who have experienced earthquakes and fires, but residents from overseas may not have such experience and not be able to react even if they hear the warning “Earthquake!”. Although we Japanese are supposed to know literally what to do, we may also panic when it comes to it.

On 18th August 2019, the “Fire and Disaster Prevention Drill for Foreigners” was held at the “Suma Lab” facility in Toyosu, Koto-ku, Tokyo, attended by 34 foreigners. LVC members participated as English interpreters and helpers. The foreign participants in this event were mostly English or Chinese speaking adults with their children. Among them, there were some who understood “Easy Japanese”.

After the drills of the “Wall Hydrant”, “Partition Break”, “Escape Hatch”, “119 Call Demonstration” and “Earthquake Truck” given by the fire station officers participants sat in groups at tables and a “Discussions, Questions and Answers” time was held. Participants seemed to gain a meaningful experience in each drill. And LVC members were able to focus their minds on fire and disaster prevention. It was a day when LVC members once again felt the importance of daily training and mental preparation.

In the future LVC wishes it could provide support not only in English but also Chinese and other foreign languages, as well as using “Easy Japanese” for interpretation and explanation.

And it may be a good idea if Japanese and foreign people who live in the same area get together and help each other to do this drill. Also, if foreign participants who attended this time become volunteers and ask people from same region to come and take part in this drill next time and explain using their own languages. This will expand this movement. Of course, LVC will be happy to cooperate with them.

So, to all foreign readers, would you like to come along next time and experience these drills?

We look forward to hearing from you.