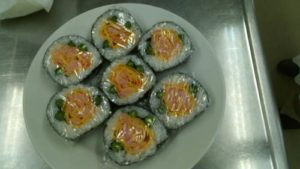 Have you ever made “rose-shaped roll sushi”? It’s so beautiful. On Saturday 17th June 2017, 5 LVC members, consisting of 2 Chinese interpreters, 2 English interpreters and a PR staff member went to the “Japanese Cooking Class”. 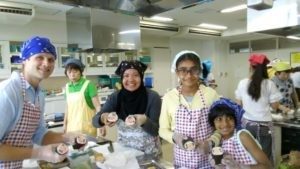 There is a cooking room on the 7th floor of the Koto-ku Sogo-Bunka Centre (Koto-ward General Culture Centre), located 1 minute from Ojima Station in Koto-ward. There were some Malaysian women, an Australian man, Indian girls, and some Chinese women with a girl and a boy; in total 11 people. At first they gathered and chatted, introducing each other either in Chinese or English, and then they moved to the cooking room next door. Everybody sighed deeply, just watching the samples the teachers made and their demonstrations, and said “What beautiful sushi!”

We were divided into 3 groups and stood around our own table and then the lesson started. Under the teachers’ kind instructions, everybody tried getting to grips with making sushi. Even for us Japanese interpreters, the rose-shaped rolled sushi was astonishingly beautiful. When the people had finished making sushi, they took it back home to show their families. 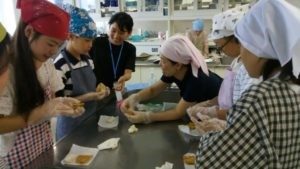 The following are the impressions of the interpreters from LVC. 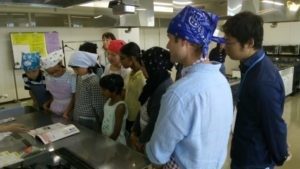 As everyone could speak some Japanese, people were chatting in Chinese, English and Japanese and seemed to be enjoying themselves. I could also have a nice time with them. The cooking teachers taught thoroughly and kindly. It was wonderful that we not only enjoyed the conversation but also learnt how to make rose-shaped roll sushi!  (Y.H)

LVC has various kinds of enjoyable activities, so why don’t you join us?

We are looking forward to seeing you.