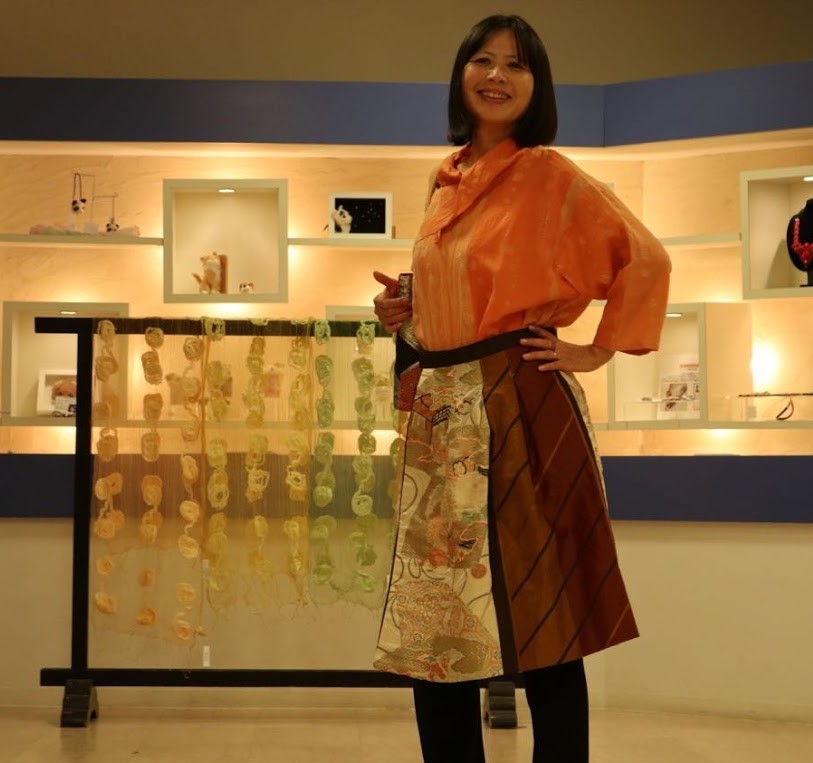 Organizers, clothing designers, operational staff, models other than LVC, gathered, for what was a fun fashion show.

Below are the voices of participants from LVC.

★ I wonder if this is the first remake fashion show here that included male models. Four of the 10 models participating were from LVC. Apart from Ms.YH, a regular person for this show, who gave us posing guidance as well as being a model and an English interpreter (MC), we, one woman and two men, from LVC played the role of models for the first time. Firstly, in front of the museum building, we attracted people, including passing foreign tourists, by holding a mini show, and after that we held a one hour show on the second floor. Since it was the first time for me to attend a show, as well as most of the other amateur models, I was pretty nervous.

Before the show, Ms.YH gave us some advice about walking and posing on the stage. In Ms.YH.’s advice, she mentioned that when we were on the stage we should have confidence and feel that each of us is the most beautiful woman or the most handsome man in the world, and if we happen to slip over, try to look as though it was on purpose.

While we were back stage, preparing for the show, the Japanese language MC demonstrated the way to keep calm by stimulating the acupuncture point of the ears. She also requested the audience to treat us kindly as we were amateur models. Because of that, I was able to walk on the stage without worrying so much. The designers also kindly instructed me how to dress up for the three kinds of clothes I wore. I didn’t even dream that I would be a fashion model at my age. In the end, I enjoyed the modelling and after the show, 5 of the LVC members, including Ms.KN who was attending as a member of staff for the show, went to enjoy drinks using our payment for this show.

Late in the evening, the photos for the show were sent by the organizer. I’m so pleased for the great work done by the cameraman.  (S.T.)

★ I thought that the important part of LVC’s participation was the role of model; however, I believe it is also necessary to attract foreigners before starting the show. As there were many foreigners coming and going around the shops, we should have made and distributed leaflets to encourage visitors to enter the show. And it may also have been effective if we had collaborated between this show and one of LVC’s activities, “Otasuke-tai” – helping people in the town.  (M.N.)

★Although this was my first experience as a model, I enjoyed it very much. And it was a worthwhile time. If I had not joined LVC, I think I could not have had such a valuable experience. Thank you very much. (K. T.)

★It was nice of the organizer and staff to take care of me in Asakusa. Thank you very much. When I saw the photographs of the show which were sent late in the evening, I saw people were enjoying it very much. At this activity, when I was working as a member of staff, there was also a chance to have English conversation and I enjoyed it. I was pleased to be an LVC member. (K.N).

★ I am pleased that it was a pleasant and enjoyable show. We tried to attract foreign visitors; however, it was quite difficult. This will be an issue for the next time. If it’s possible, I’d like this show to be combined with a “Walking around the town tour” and to make a plan for foreign students. For this we need the cooperation of various parties. The show next time is planned for September. Why don’t you join LVC and have fun taking part with us in such activities? We look forward to hearing from you.  (Y.H).